Last year I though I would plant an Heirloom Roma Tomato and a Yellow Cherry Tomato plant with the thought "I'll get a couple of tomatoes out of this and give a few away" I planted them in the traditional 80% rule (bury 80% of the start in the earth when planting) but didn't think much of what that might do. Near the end of our 235 day growing season I had made 2 quarts of sauce and had given away about 5 pounds of tomatoes. I had a few people coming over for a late summer bbq so I decided to make something I've never made before. For a little twist, I thought I would make it gluten free in honor of my big sis (Links to her blog on my links page)

For the crust I used a store bought Gluten-free mix by the name of Pamela's Gluten Free Bread Mix (Pamela's Products) I love this stuff and will defend it for even people who don't need to be gluten free. Many home cooks find pie crust daunting at first because it can be very easy to over work the crust, making it bready not flaky. This is because (food science content warning) the gluten chains get linked and stretched out like in bread crust. The gluten free path avoids this completely, making it very difficult to get "bready" crust :) Now back to the recipe!

This recipe is really easy to stay on top of because there is a LOT of cooking time where you don't need to be present. Preheat your oven to 300* and begin cutting your tomatoes length wise and placing them into your pan to be sure you have enough to cover the bottom, allowing them to all to remain mostly cut side up. Chop your herbs roughly, sprinkle over the tomatoes along with olive oil, salt and pepper to taste and toss to coat evenly. 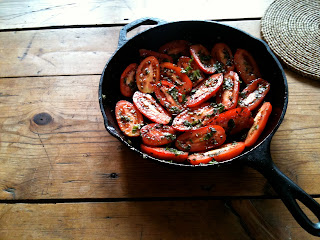 Make sure all of your tomato halves are cut side up and put the pan in the oven to slow roast for 2.5 hrs. The temp is so low that you don't need to worry too much about burning but check at the 2hr mark if you like the tomatoes a little less roasty. Now to make the crust while those are in the heat.
Measure out your dry mix in a large bowl and add your butter by grating it into the dry. Combine by smearing and pressing the flour into the mix with your palms to create sheets and flakes, working quickly so the butter doesn't get too warm. 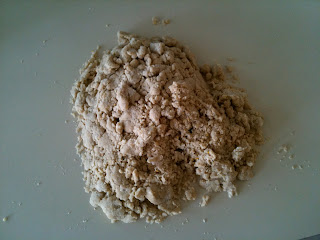 What you want to see is a mealy mix with maybe a few pieces the size of peas. Add your ice water a little at a time and toss until you get the consistency you want. Press into a 3/4" thick disk and place in the fridge. Take the disk out of the oven 20 minutes prior to the tomatoes coming out to let is warm slightly as this crust tends to get hard and unworkable if its too cold. When the crust is workable, roll out a disk slightly larger than the pan and set aside.

When your tomatoes are done to your liking, take them out of the oven and turn up your heat to 400* F. Crumble your chevre directly onto the tomatoes, taking care to get some crumbles between the spaces in between. lay the crust over the cheese and fruit and tuck it into the sides with the blunt side of a butter knife or spoon. You don't need to too precise and a rough edge looks nice and rustic! Place the whole thing in the 400 oven and bake for 20-25 mins until the crust begins to brown slightly. Remove from the oven and cool 10 minutes on a wire rack.

After you've let it cool a bit, it's time get it out of the pan. Place a large serving platter (I ended up using a large wooden cutting board. Ended with a great presentation this way actually) over the top of the pan and invert. If it doesn't pop out right away just shimmy it a bit and it'll release. Scrape any tiny bits of cheesy stuff off the bottom of the pan and replace them in the tart.

You are the best!!! Welcome to the food blogosphere.
Sending love and looking forward to reading about your tasty creations!
- Your big sis
PS Add a subscription link. I want all the updates. :)

I just added my feedburner HTML :)