Even if you're an old hand at home bread making, sometimes you're just tired and you give in to the store's fancy bread section.  But in that fallback, there is always the price and the problem of leftovers, forgotten, slowly developing opposable thumbs in the back of the fridge.  But when it comes to throwing out food, especially these days, I can't give in without a fight.  Where there's a will, and a quick spice drawer shuffle, there will be... 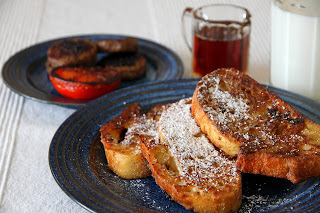 Simple, short post this time... Nothing wrong with that though.  After I've tried this the first time, I can honestly say I like it more than french toast made with the traditional egg bread.  It has a fluffier consistency and doesn't tend to get soggy quickly.  The bubbly interior of the french bread holds on to the egg in such a way that it cooks through and gets crispier faster.

Start with a consideration for the simple syrup.  Most syrup recipes wont have this noted but in my experience, the flavors need an overnight chill in the fridge to become fully fleshed out and intense.  This stuff will keep for a long time in the fridge so its easy to make in about 10 minutes during the week for use on a Sunday morning.  If you've got syrup pre-made, you can just add grand mariner to taste.  Now lets get to the toasting! 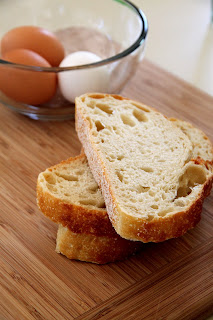 Slice your french bread about the thickness of thick egg bread (3/4" -1") and set aside in a bag.  If it's a bit old and getting hardened, slice off the dry end and put the rest in the oven on warm for about 5 minutes.  Lightly whisk eggs and cinnamon in a shallow pie dish then add milk and whisk thoroughly.  If you're going to use ground cardamom instead of Decorticated seeds, add it here with the cinnamon. 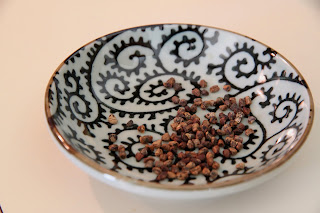 Heat butter and decorticated cardamom in your cast iron skillet over medium heat until the spice becomes fragrant.  You won't really need to worry about getting grit as the seeds cook and soften, but if you want to avoid cardamom bits in the final cooked toast, just scrape the seeds off to one side before you add the battered bread.

Lightly brush your bread with a small amount of orange simple syrup, batter them in the egg mixture and place in the frying pan.  Fry about 3 minutes per side, flipping only once to avoid smashing.  The french bread will end up being more fragile than regular bread once battered so gentle is the way to go.  Dust with powdered sugar and serve with warm maple butter syrup.

Experiment with different kinds of flavorings in the simple syrup and spices added to the egg to get a combo you like.  You could even forgo the cinnamon in the egg and make a strong cinnamon simple syrup.  Try brushing the toast with a berry juice before battering with a brown sugar/egg/milk mixture.  So many options to be tried...  Have fun with it! 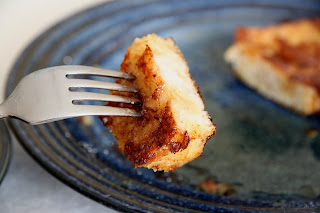 Sounds so good. Am such a huge fan of cardamom!

YUM!! French toast is one of my favorite breakfast treats! Looks delicious!! I've recently bought some cardamom for the first time too :)