Well... beans I guess would be the correct word. As much nostalgia as the smell of common household vanilla extract in cookies and cakes has for me, there really is no true substitute for vanilla beans when you're making anything that is solely vanilla flavored.  A strong, sweet spice derived from the fruiting bodies of certain Mexico native orchids, vanilla is second only to Saffron on the expense scale.  In a side-by-side smell test, especially in soft and frozen custards, there can be no mistake in both the intensity and complexity of real vanilla beans over more common, alcohol diluted extracts.  Despite lack of interest in "vanilla," the maybe-not-so-humble bean deserves a little more credit: 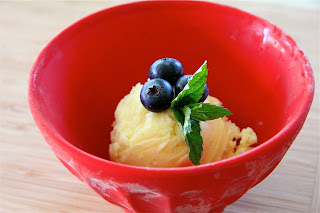 
It's icy cold delicious on a hot day!  Most if not all of us will scream for it!  And in this case it may even be in a certain Mediterranean language:  Gelato.  This Italian variant of frozen custard treats gets its dense, creamy texture and intense flavors from a lighter cream base, lower sugar ratios, and a quick, small batch deep freeze resulting in less overage (air incorporated in churning.)  Whatever you want to call it, the difference is one you will likely remember and come back for more!  No time like the present I suppose so lets get started:

Make sure that you will have plenty of room in your refrigerator for the large metal bowl or some other vessel to hold the cooked custard while it hydrates.  This is an important step so be sure you will have room while not overloading your fridge and raising the internal temp. 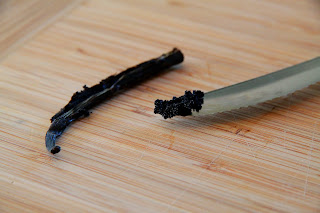 In a medium, fairly deep sauce pot (deeper and narrow is a better bet than shallow for this) combine milk, cream, salt, vanilla seeds, and vanilla pod and bring to a scald.  This "pasteurization" stage is more about cooking the milk fat (and later the egg mixture), to assist in binding the water and preventing large ice crystals forming when freezing, but we'll get back to that later...

Let steep covered for 20 minutes to allow as much of the vanillin to seep out of the pod, then bring back to a scald. Pour your hot cream through a fine strainer to remove the large pod skin and any milk skin that may have formed as the cream steeped. 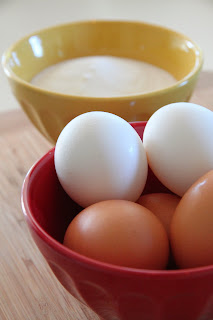 In a large metal bowl combine eggs and sugar thoroughly with a whisk.  You'll want a bowl with a fairly smooth shape to facilitate scraping while you cook.  Pour cream into eggs very slowly to avoid overcooking and "scrambled" egg chunks.  You still might end up with some but it'll get strained out in the end.
Place the bowl over a pot of simmering water (low heat) and cook 8-10 minutes, scraping the bottom and sides continuously with a rubber spatula.  You'll want to see a very light custardy consistency that clings to the spatula and leaves a line when you run your finger through it.  Strain once more and pour into a clean vessel that will fit easily into the fridge close to the back.  Cover with plastic in contact with the surface to prevent skinning, and toss in the fridge to chill and hydrate the fat overnight at least 6 hours.

HA!  OK I'll calm down...
When we make ice cream, more importantly when we freeze and churn the custard, the last thing we want is a "slushy" almost crunchy consistency.  About as far from creamy as you can get so obviously no fun...  Sorbet maybe but not really "cream."

When we let an ice cream custard base chill overnight in the fridge, it comes down in temp to facilitate even, slow heat exchange when we toss it in the machine, but maybe more importantly to allow the fat globules to hydrate properly.  Similar to whipped cream, the action of the fat globules wanting to cling and bind the water into a semi stable network of tiny particles, inhibits the formation of complex, large ice crystals when we churn later.  There it is - bound water networking in high fat liquids yielding smaller ice crystallization and a creamier frozen treat for a hot summer evening!

From here, pour into your machine and churn according to the instructions at the lowest speed setting 12-20 minutes until you have the consistency of thick soft serve. Place in a freezer-safe container to set a few hours before serving.  Serve with fruit, chocolate, cakes, pies.  I like to toss my ice cream bowls in the freezer for about 20 minutes prior so they don't melt the ice cream.

Just like any basic ice cream base recipe, this can be flavored with almost anything you can think of, so go nuts!  Nutella, cocoa, coffee, whole berries, fruit puree, zest, whole and ground spices or flower extracts.  Just keep in mind the fat content so you don't change the overall fat levels too much. 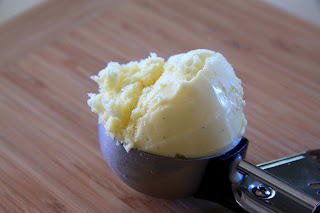 Yum! We've had our ice cream maker in the freezer for about a month now but haven't used it yet. Once again you are inspiring me!
xxoo

In the words of Invader Zim... INGENIOUS!!

Which is what you and your blog is :)

Yum! I don't care what anyone else says...vanilla rocks! It's always been my favorite, so I can just imagine what this will taste like since it's made with whole vanilla beans!